What is SCHWARZ AUF WEISS?

... musical theatre by German composer and theater person Heiner Goebbels where musicians become actors – they not only play their instruments but speak, sing, play badminton, throw balls onto a drum, make tea, play dice on a cymbalom cover...

Musicians were set free and can be seen or heard everywhere – in the audience, in front or behind spectators, next to you...

Texts by E. A. Poe and T. S. Eliot in their English original or French, Czech and German versions sound through the performance. They are here not only for their content and significance but for the beuty of spoken word. 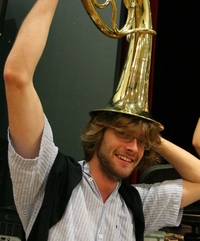 Designing sound for Schwarz auf Weiss was probably the most complicated thing I have ever worked on. There were 18 musicians moving around the hall and among audience who all needed amplification. I used wireless soundsystem with high quality microphones. Furthermore it was needed to dynamically change sound panoramas of all instruments at once that you cannot possible manage with less than 10 hands. I used digital mixing board and programmed all changes into a set of scenes including changes in sound effects. I worked live on the rest (volume, EQ, dynamics) to follow delicate differences and specifics of each performance.

To achieve natural sound, each instrument needed to be heard from its real place / direction. I used therefore 6-channel space amplification system (ten loudspeakers around the audience) that can produce this type of sound effect. This system is also able to simulate various acoustics – e.g. a church with long echo / reverb.

While mentioning acoustics – it was extremely difficult in that particular space. Fortunately, most of the problems with unwanted rebounds were solved by our set designer and his back wall made of cardboard boxes.

Badminton bats’ amplification added frosting to this cake. I fixed on them piezzo transmitters connected to the wireless system. With the help of the computer I changed their signal into MIDI notes that activated prerecorded sounds of percussions.

It was a great adventure.

A production of such a specific and unique work as Schwarz auf Weiss by Goebbels requires maximum effort from the whole artistic and organizational team. Work on preparation of the presentation led to many interesting experiences.

Where to find a specimen of the traditional Japanese instrument called the koto in Prague? Why, in the Czech-Japanese Association, of course! But it’s not so simple. After all, this is an instrument that must not come into untrained hands. Thus a condition was to have a ‘certified’ koto player, i.e. someone who knows how to play the instrument. Naturally we had no such person among our musicians. It looked as though we were up a blind alley. But somebody up above must be on our side. Courses in playing the shakuhachi and koto were given during the summer in Prague, and so we sent our violinist Anna to participate. She turned out to be extremely talented, so on Saturday she had her first lesson and on Tuesday her first concert! And in the end she received a koto on long-term loan directly from Professor Haruko Watanabe of Japan.

A person coming to a rehearsal of the Berg Orchestra before the summer break might have felt like Alice in Wonderland. The musicians held in their hands the most varied and peculiar brass instruments – from an enormous tubaphone through trombones and trumpets to helicons – and produced on them some more-or-less articulated sounds. The result suggested noises from the elephants’ pavilion in a zoo. But each of the players also showed enormous enthusiasm and curiosity. Their task was to learn to play their instruments during the summer break at least well enough to make particular tones come out of them. If you think that’s not easy, you’re right. But on the other hand, it’s a wonderful adventure.

The zither was a very popular instrument about a century ago, but has now almost disappeared. Nevertheless it turned out there are hundreds of them in used goods stores. Without knowing this, we contacted the president of the Czech Zither Association. At the end of a long telephone conversation about zithers, the manager of the orchestra found out that the president of the association is a relative of hers!

Conductor Peter Vrábel had the feeling that he didn’t have enough to do during the course of the performance, so he decided to prolong his stay on the stage. And he pursued the idea with his characteristic inventiveness. In the score he discovered the possibility of playing some passages on bass guitar. He himself immediately procured an instrument, accessories, and a bass guitar method book, and began to practice regularly. Then he found out that the stage director Martin Kukučka had a rare five-string bass guitar in some corner at home, left over from his adolescence, and immediately commandeered it. Today Vrábel is thinking half-seriously about founding a band.

PA: Main stereo according to the space (200 people – 1xdVSub, sides: 2xdVDosc)
Frontfills needed for broad halls. Surround – 4 channels 2 speakers each (115HiQ on stands) around the audience – 4 behind + 2x2 on sides.

preferably a nontraditional hall with raked seating; concert hall or theatre are also possible (raked seating a must)